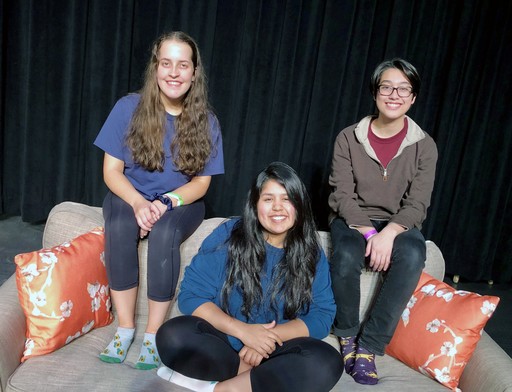 Get ready to laugh, a lot.

The spring play, A Trio of Comedies, is three one-act plays. Isabella Hernandez directs So You Wanna Be a Cheerleader, Kelly Mansour directs Dinner With The McGuffins, and Lauren Arnott directs An Absolutely True Story (as told by a Bunch of Lying Liars). Every student in Ursuline's Advanced Theatre Class is involved in the production, including staging, set, and costuming responsibilities.

The entire audience will be seated on the UCPA stage during the special performances. Adult tickets are $10, and student tickets are $5. Purchase online.

Each play is a different type of comedy. Ursuline caught up with each director.

"This one is slapstick comedy. All of it happens in a high school. The jokes are obvious and traditional. I listen to a lot of comedians, including Hasan Minhaj and John Mulaney.

Director highlight: "The way we've done rehearsal is completely based on what we've seen here in every production we've been involved in at Ursuline. It's challenged me more than I thought. I have the biggest cast with 14."

"The comedy is less obvious. McGuffin is an Alfred Hitchcock movie technique. Something happens to the characters. It doesn't seem like a big deal when it happens, but it ends up driving the plot. It's darker but still very much a comedy."

Director highlight: "This has been fun and difficult at the same time. The actors are all our friends, but they'll often ask questions you're not necessarily prepared to answer. The audition process is really intense. It's fun to see the interpretations. Each director is a senior, and this is our last hurrah."

"It's more slapstick, but a bizarre humor. It's crazy from start to finish. A vase breaks, and the parents are trying to find out how the vase broke. The set is spilt into a memory space and a now space."

Director highlight: "Directing this was my favorite thing with Ursuline Theatre. The way the show runs relies on us. There's pressure, but it's really fun. I can make the decisions about it. I was also very proud of Mary Poppins."

Congrats to the cast and crew for their hard work!