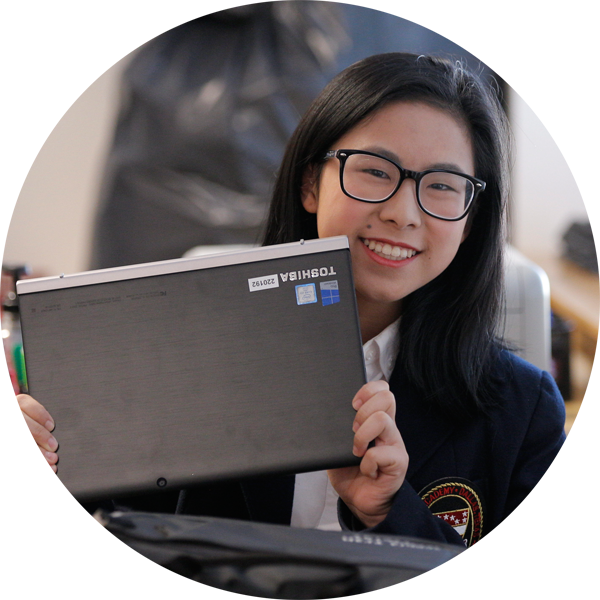 All new students are required to purchase a laptop computer through Ursuline Academy's laptop purchase program. Laptop package costs, including software, 4-year upgraded warranty, on-site maintenance, custom load, hot spares, bag and wireless network, totaled $1,995 for the 2020-21 school year. The cost of the laptop package is not considered in financial assistance decisions. Learn more about Ursuline Academy's 1:1 laptop program in the Technology section of this website.

Payment options include one-time payment in full, semi-annual, and monthly payment plans. The monthly plan includes eleven monthly payments beginning in June and ending in April. These payments must be by authorized automatic bank withdrawal.

For 2021-2022, Ursuline has granted more than $1.4 million in financial assistance and merit awards to 198 students, approximately 23% of the student body.

The Ursuline Academy of Dallas Financial Assistance Program offers assistance to students in need of financial support. In 2021-2022, the Academy will grant approximately $1,430,000 in financial assistance and merit awards to 198 students, representing approximately 23% of the student body.

To be eligible for assistance, a family/student must demonstrate financial need, meet the entrance requirements of the Academy, and be current with all financial obligations due.

Every effort will be made to award some tuition support to eligible candidates. Students may be eligible for a grant each of their four years at Ursuline; however, families must apply each year. Awards are not automatically renewed.

January 10, 2022, is the deadline for submitting the completed FACTS Grant & Aid application form, fee, and a complete, executed copy of your 2020 Federal Income Tax Return directly to FACTS. The Tax Return must include all tax schedules and copies of your W-2 forms. Your application will not be considered until all information is received.

Start or Complete a FACTS Application

Decisions regarding financial assistance will be mailed on March 12, 2021 to families that have submitted ALL required documentation. If the application remains pending due to an outstanding tax return, the family will be notified in a timely manner by FACTS.

If you do not receive a notification letter, contact Connie Lovejoy in the Finance Office to check on the status of your application.

The following academic scholarships are available to incoming freshmen and are not based on financial need. Candidates are awarded academic scholarships based on entrance exam scores and admission files. These scholarships are renewable each year based on current academic performance, disciplinary record, and achievement. A minimum 3.8 grade point average is required. No separate application is needed – the Scholarship Committee considers all accepted students. Award letters are mailed to selected candidates with their Ursuline acceptance letters.

Gretchen Kane, President, is a graduate of the University of New Orleans where she earned a Master’s degree in Mechanical Engineering and a B.S. in Mathematics. She has served as President of Ursuline Academy in New Orleans, and in various administrative positions including Associate Vice President of the Jesuit Secondary Education Association in Washington, D.C. and Academic Assistant Principal of Jesuit High School in New Orleans.

Andrea Shurley, Principal, came to Ursuline with 11 years of teaching and administrative experience with the Schools of the Sacred Heart in San Francisco, California. She received her BA in English from the University of Texas at Austin, earned her MA in English from Texas State University-San Marcos, and earned her Doctorate of Education in Catholic Educational Leadership at the University of San Francisco. Prior to her work in education, she had a five-year career in the technology field.

Sr. Kathleen, Graduate of ’38, is a former teacher and principal of Ursuline Academy of Dallas. She served in various levels of education in Dallas, St. Louis, Galveston, and Springfield, IL. Her many years of service included work as a math teacher, as Principal at the Dallas campus and her work in Parish ministry. For more than six decades, Sr. Kathleen dedicated her life to the intellectual and spiritual growth of her students. In her later years, Sister Kathleen assisted in the Finance Office, always offering a warm and friendly welcome for students and parents.

Sr. Mary, Graduate of ’51 and former principal of Ursuline Academy of Dallas, has served generously as teacher and administrator in New Orleans, Dallas, San Antonio, and Springfield, IL and at the Province level. She has dedicated 48 years of loving service to the Ursuline Community. Sr. Mary is committed to the Ursuline mission of reverence for life and global awareness of peace and unity among nations. She currently works in the President’s office at Ursuline Academy.

Sr. Dolores Marie, Graduate of ’32, Ursuline Academy of Springfield, IL, was a former principal of Ursuline Academy of Dallas and life-long poet. She distinguished herself in her many years of service in various positions in the Ursuline Community in Dallas, Laredo, and Springfield, IL. Ursuline alumnae and friends worked together to establish this endowed scholarship in her honor in 2003. The award is based on financial need as well as outstanding writing ability. An Ursuline Sister for seven decades, she served as an English teacher as well as Principal in Dallas for 17 years. Sister Dolores Marie was an avid reader. Sr. Dolores Marie was the pioneer Principal of 4900 Walnut Hill Lane, and a leader in education at Ursuline for many years.

Sr. Catherine, Graduate of ’36 and Ursuline Sister for 61 years, she dedicated her life to the service of others, with Serviam as her motto. She worked at Ursuline Academy as teacher, principal, prioress, librarian, and tutor. Her service also included parish ministry in Mexico. A lifetime model of the Serviam spirit, Sr. Catherine inspired Ursuline students to give meaningful support for those in need.

Valedictorian of Class of 1917, Sr. Marie distinguished herself in her service to the Ursuline Family in Texas and Mexico. Her sharp mind and wit endeared her to all until her death at age 102. As a teacher of Spanish and Latin, she encouraged in her students the finest qualities of leadership and intellectual growth, fostering a deep appreciation for spiritual formation. Sr. Marie Staats is lovingly remembered as a bright and charming woman who motivated her students to truth, honor and service.

Fr. Deeves endeared himself to the entire Ursuline Community. As teacher and priest his love and respect for students, their families, and teachers was evidenced in his untiring service to all. In June 2003, the Ursuline community began an effort to endow this scholarship in honor of Fr. Deeves. When the scholarship is fully endowed, it will be awarded to students based on both financial need and academic interest in science. Since the time he entered the Jesuit Order in 1945, Father’s life truly exemplified the Jesuit motto, “Men for Others.” During his time at Ursuline, Fr. Deeves served as a Physics and Theology teacher, as well as chaplain and Counselor to many.

The Ursuline Academy Fine Arts scholarship is awarded to an outstanding applicant whose passions and achievements pertain to the areas of Visual and/or Performing Art. The student’s interest and involvements in Art were highlighted as a part of her application as well as her hopes for her future endeavors at and beyond Ursuline.

The Ursuline Academy Humanities scholarship is awarded to an exemplary applicant whose emphasis and focus pertains to the areas of History, Sociology, and/or Psychology. The student’s interest in studying, serving, or working in a humanities field were highlighted as a part of her application as well as her hopes for her future endeavors at and beyond Ursuline.

The Leadership Scholarship recognizes an incoming ninth grade student who exemplifies a true spirit of leadership and service. The scholarship is for one year (ninth grade only) and is a joint venture of the student’s parish and Ursuline Academy. The parish nominates a current eighth grade student and contributes $500 that is matched by Ursuline Academy for a total scholarship of $1,000. For more information, please consult your parish office.

The Ursuline Academy Technology scholarship is awarded to an impressive applicant whose achievements and interests involve Engineering, Robotics, Computer Science, and/or coding. The student’s interest in studying, serving, or working in a technology field were highlighted as a part of her application as well as her hopes for her future endeavors at and beyond Ursuline.

Once all required documentation is submitted to FACTS Grant & Aid Assessment, including the current year Federal Income Tax Return, the Chief Financial Officer will make recommendations to the Financial Aid Committee members. Recommendations are based on the report from FACTS, tax return, and amount of funds available that year for financial support.

The amount of financial aid awarded varies from year to year. The annual proceeds from the Mardi Gras Ball comprise the largest contribution to the scholarship fund. An amount is calculated on the FACTS Grant & Aid Assessment for the family contribution. This amount is deducted from the tuition obligation and a percentage of need is applied. The total amount of funds available and the total number of students applying determine the percentage. Historically, the Academy has been able to provide 50% of financial need.

You may apply at any time. However, because there is a limited pool of funds, the funds may already be allocated when you apply. You will be put on a waiting list in case funds become available at a later date.

The approved award is applied on a per semester basis. Once an application has been approved, an Acceptance Letter will be mailed to the family to be completed and returned. When the Finance Office receives the Acceptance Letter, the first half of the grant will be applied to the tuition balance.

No. Applications must be submitted annually with current information in order for a family to be eligible for assistance each year.

If the amount on your tax return does not agree with the information provided on your FACTS Grant and Aid application, any approved award may be adjusted accordingly.